PUT PRESSURE ON THE VESSEL!

PUT PRESSURE ON THE VESSEL!

MG’s ride towards new horizons shows no sign of stopping, indeed it is increasing more and more under the pressure of numerous requests from customers all over the world: it is no coincidence that the object in question is precisely a pressure vessel of the Mezap Sp. z o.o. group, a major Polish company operating in the chemical, petrochemical and nuclear sectors. A special mention to this group is linked to the vast list of references that the company has collected over time, which for obvious reasons of space cannot be listed in full, but just to whet the curiosity of our readers we mention the cases of Air Liquide (French multinational company active in the industrial gases sector and offering technological solutions and engineering services to industry) and Borealis GmbH (Austrian company in the chemical sector for the production of polyethylene and polypropylene).

The company, after contacting our faithful and profitable resellers Hezinger Gmbh and INTE – Maszyny Sp. z o.o, decided to opt for a 4-roll plate bending machine model M3120T, which allows to obtain 120mm in bending and 100mm in pre-bending. This gigantic machine was chosen with the aim of expanding production, which mainly consists of pressure vessels, heat exchangers, heaters and fractionation columns. The M3120T was delivered to its destination with a number of optional extras, including a 680mm interchangeable top roll, a 3x3m roller conveyor, a central support for diameters up to 5m, a double arm side support to handle and guide the plate avoiding any possible fall and last, but not least, the Synthesis system: on traditional 4-roll machines, during the re-rolling phase, the lower central roll is not in lower position and only the top roll remains powered while the side rolls spin freely. On the new Synthesis bending machines MG line, by the turn of a key can engage the side roll motorization and work with the top and side rolls powered. This is another success for MG, which, thanks to the cooperation of its most reliable dealers, is able to satisfy all market requirements, from the smallest to the largest, as in this case. Mezap Sp. z o.o. is not new to the use of plate bending machines, and already has a 4-roll plate bending machine model M2550G in its workshop, which means that the hard work done in the past has paid off and allowed the company to re-enter the market with a new demand. Speaking of machines, we would like to point out that three MG models are already in operation at the Mezap plant: 4-roll plate bending machine M2550G (working in the factory since 2005), 4-roll plate bending machine M2520C (working in the factory since 2012) and 3-roll section bending machine AR110 (working in the factory since 2012).

We would like to conclude by quoting a sentence from the group’s president, Mr Andrzej Kozak, which expresses the meaning of MG’s daily work, aimed at constant growth and development of its skills: “The use of modern technologies, specialized instrumentation such as our steel plate-rolling machines made by Italian producer MG SRL makes us able to take any order in a wide range covering our production profile”. Massimo Roccia, president of MG, echoes him: “Once again MG has shown that it knows how to work side by side with its dealers, without losing sight of the focus on the end customer. All this leads to a greater awareness of our own capabilities, often in fact the external conditions and the difficulties that the world is experiencing seem to put a brake, but we immediately regain vitality thanks to the precious contribution of our dealers and loyal customers. 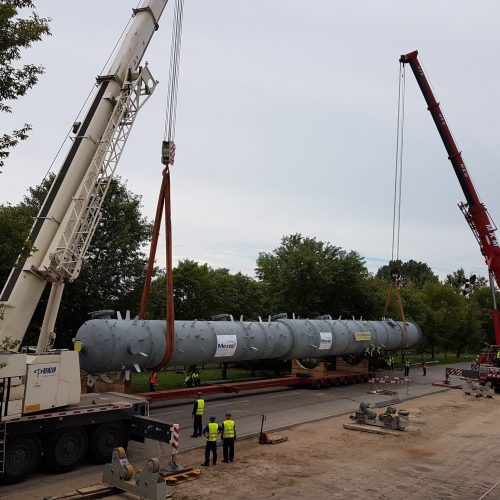